Life sometimes goes by quickly. In our practice, West Shore Urology, between the busy office and surgery schedules, one day tends to run into another. One day, a couple of years ago, however, we all received a really big wake up call. 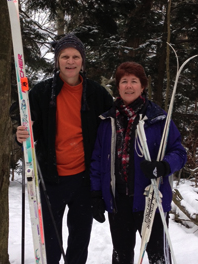 My friend and practice partner, Dr. Joe Salisz, just wasn’t feeling quite right. Joe had always been an active runner and outdoors man. But, over time, he began to feel abnormally tired. He made an appointment to see his primary care physician. His exam was essentially normal. Routine lab work, however, determined that his PSA was abnormally high. We were shocked when the pathologist determined that Joe had a very aggressive form of prostate cancer.

Joe underwent further testing; options were discussed and reviewed. With the support of his family and friends, Joe chose to undergo surgery for his cancer. During surgery, it was determined that his cancer extended from the prostate and into his bladder. Joe awoke from his prostate and bladder surgery with a urostomy, a stoma and urine collection bag, attached to his lower abdomen.

At this point Joe could have given up. He could have left his patients and our practice, and gone out on permanent disability.  Instead, he battled back.

Joe found that one of the most surprising challenges to his recovery was his ostomy.

As Joe started to recover from surgery, the first thing he noticed was the unsightly nature of the ostomy bag. He also noticed that the bag was difficult to dry after showering. His own perspiration would frequently collect on and around the bag. Upon returning to work, he became acutely aware of the smell of his own urine – especially when counseling patients in small, closed rooms.

Necessity Is the Mother of Invention

Fortunately, we live in a small community, and Joe has many talented and supportive friends. He put together a team of business people and a retired ostomy nurse, and an innovative ostomy bag cover was designed. The cover, which would come to be known as StomaCloak®, could effectively camoflauge his bag, absorb the odor of fluids, and wick away perspiration from the bag and his skin. As word spread about Joe’s story and invention, more and more ostomy patients, or ostomates, asked if they could try the device. As a result, StomaCloak® ostomy pouch and bag covers are now locally manufactured in Western Michigan for ostomates around the world.

Joe’s experience with cancer not only changed him physically, it also changed the way that he thinks about illness and its day-to-day effects on people. In addition to continuing to practicing urology full time in our community, Joe now also finds meaning in sharing his story, and advancing the care of ostomy patients everywhere.

The manner in which Joe has handled his illness has been an inspiration to not only to his patients, but also to his physician colleagues and fellow ostomates.

This past week, WZZM television and Gilda’s Club of Grand Rapids, Michigan, caught Dr. Saliz by complete surprise with an office “Cloud Bust”–one of the many activities in West Michigan in preparation for LaughFest. LaughFest is a weeklong festival of laughter that helps patients and their families find their smile in the midst of a cancer or grief journey.

On most days, time still goes by too quickly at West Shore Urology. But after following Joe on his journey, I would like to think that we value each day, and each other, a little more. This week, we took a little extra time to celebrate with Dr. Salisz. It gave us all something to smile about.