One of the many great things about social media is the different perspectives and experiences participants bring to the discussion. Recently, I read a thought provoking LinkedIn post by Dr. Howard Luks, an orthopedic surgeon and leader in healthcare social media.

“Sadly, it has also become painfully clear that many are now present on the social media stage without knowing why or what they are doing there.  After seeing doves of physicians and groups jump on board and simply not get it… is it time for them to retreat?”

After reading the post I realized, as a urologist and as a beekeeper, my experience with social media has been quite different. 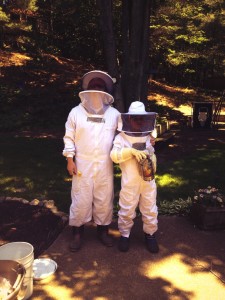 Beekeeping with My Son in Michigan

Bees – A Model for Social Interaction

Finding the Right Place to Land

Earlier this Spring, we were fortunate enough to witness something truly remarkable – one of our colonies started to swarm into a neighbor’s cherry tree.

From the cherry tree, scout bees started searching for new locations for the colony’s permanent home. The scout bees then returned to the cherry tree and recruited other bees to inspect each potential new location. Over several hours, the bees evaluated numerous locations.  In the end, however, only a single location, the one that best met the needs of the colony, was chosen.

From an outside perspective, this process might seem chaotic and inefficient. Swarm behavior, however, has been scientifically studied. In the absence of human interference, the interactions between individual bees ultimately lead the colony to the place where it is most likely to survive and thrive. 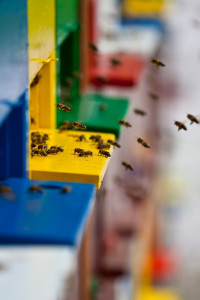 Seek a diversity of options

Encourage free competition among the ideas

Use an effective mechanism to narrow choices

Over the past several years, we have seen a rapid rise in the number of urologists participating on social media platforms such as Twitter. These physicians are not just creating accounts, they are actively using social media to intact at conferences, journal clubs, and to engage in continuous learning.

At times, almost everyone makes a tweet, post or comment that they later regret. As in real life, this is a natural part of the learning process. Unfortunately, because of third party services, social media does not come with a very reliable ‘delete button’.

Ultimately, however, tweets, posts and comments that are not consistent with the thinking of the whole are ignored or challenged, and the community finds its way.

I am very excited about the way in which urologists from around the world have embraced social media.  It has occurred organically, without the formal vision of any one governing body. As a result, traditional urological societies and governing bodies are faced with new challenges, and amazing new opportunities.

Urologists on social media, I believe, have overwhelmingly represented our specialty in a positive light.  Our efforts are encouraging medical students and others to take a closer look at urology. My hope is that, over time, we will make even greater use social media as a tool to help better engage and educate our patients.