Flying Half Way Around the World to Attend the AUA

From Australia to Orlando for the 2014 AUA Meeting

The Annual American Urological Association (AUA) Meeting in Orlando, Florida, is only a few weeks away.  Every year, thousands of urologists from around the world travel to the United States to attend this meeting. For this guest post, I asked my Australian tweep and urology colleague, Dr. Nick Brook, to explain why, each year, he literally flies half way around the world to attend the AUA.

No Pain, No Gain 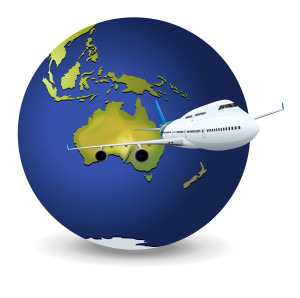 It’s a long way to the American Urological Association (AUA) Annual Meeting from Australia. Even dressed up in pointy-end disguise, long distance travel is a mongrel. Relatively safe, but edgy. Exhausting, ageing and bad for the pituitary, skin, nails, and zen.

But the meeting is worth every shattered telomere that the journey inflicts.

Why I Make the 23 Hour+ Journey to AUA

First up, there is the cognitive bias of recency (the better the previous AUA, the easier the next trip), and although the quality of the venues (from the perspective of an outsider on a conference) varies, the level of clinical and scientific work and debate, and relevance, was set high ages ago – and is on a perpetual rise.

The meeting is also a phenomenal value for the money – five solid days of top drawer options (more than you could get through in a lifetime) for a song. Compare this to the cost of some other national annual meetings.

No criticism of these other organisations, as of course there is an economy of scale. But it’s a credit to AUA that registration costs so little.

From the big podiums to the small poster sessions, it’s a delight to hear intelligent, capable people talk sense, and occasional nonsense. It’s always a treat to hear and see the big names talk. But it’s a religious experience to witness the transubstantiation of a urology legend, whose papers I blindly quoted in exams and unit meetings, become flesh and blood.

Every year has a session or two that you absolutely don’t want to miss.  Who can forget the poor chap from USPTF having to try to explain himself to a pack of 2000 Walking Dead flesh-eating urologists (Atlanta – naturally)?

Then there was the bloke from NASA who single-handedly raised the mean IQ of the entire hall by about 30 points just by walking on stage (San Diego). These legendary moments may not compare to Brindley (Las Vegas, 1983), but I was only twelve that year.

There are some bothersome, unavoidable things about AUA. The meeting is almost too big, the plenaries are almost too latitudinous. The trade hall is necessary, but makes me feel intuitively grubby. It’s epitomized by a machine named after a Tom Hanks character, or film, or something with their flashy sales force of Stepford Wifebots and Wideboy Pimpbots.

My mellow was further hashed when, a few months ago, the 2014 program announced a session titled ‘Extreme Surgeons’. What’s next……’AUA Cribs’? ‘Hell’s OR’? ‘Pimp my DVSi’?

I should apologize for these minor gripes.  They are tiny issues.

The Conference Committee does a brilliant job of putting together a meeting that is too good to miss.

There are other pluses. A huge one is the blind-date excitement of meeting up with the twitterhounds and uro-twitterati who have become long distance microblogging, microfriends with the hope of turning them into macro versions. (The conference hashtag is #AUA14.)

There’s also the opportunity to hunt down or avoid old adversaries and old friends – perhaps, to make new ones in each group?

“Give me AUA (preferably in San Diego or Las Vegas), or give me death”.

Hope to see you in Orlando, and then every year until I drop.

Dr. Nick Brook is a Urologist in Adelaide, Australia. He’s British and Australian, but English when it comes to cricket, soccer, rugby and other matters of international importance. He would love to live nearer to the AUA Annual Meeting. Nick works at the Royal Adelaide Hospital where he is a Consultant, and Director of Urological Cancer. He is also an Associate Professor at the University of Adelaide.