Flourishing with an Ostomy – Celebrating Great Comebacks with Amy Oestreicher

When I was a boy, I was a San Diego Chargers’ football fan.  Although they were a great team, I liked the team because they were often the underdogs. They also had Rolf Benirschke, a fantastic placekicker.  I remember, more than once, watching Rolf kick a game-winning field goal – snatching victory in the last seconds from the jaws of defeat.

What I didn’t know at the time was that Rolf suffered from severe Crohn’s disease, and played a significant portion of his professional football career with an ostomy.

After retiring from the National Football League, Rolf, with the support of ConvaTec, created Great Comebacks – a program that recognizes and honors exceptional contributions made by those living with an ostomy (ostomates).

Hope is an incredibly powerful force. Hope comes from somebody who has been there. – Rolf Benirschke

In 2014, our very own Dr. Salisz was honored as the Great Comebacks’ Central Region winner for his work as an ostomy advocate, and for StomaCloak.  At the event, Dr. Salisz met many other amazing ostomates including Eastern Regional winner, Amy Oestreicher.

Amy has an amazing story of courage and determination in the face of great adversity.  I asked her to share her story – as an inspiration for others living with an ostomy –in the following guest post.

I’ve been through many ups and downs over the past decade, but with the help of my friends, I’ve made comeback after comeback. – Amy Oestreicher 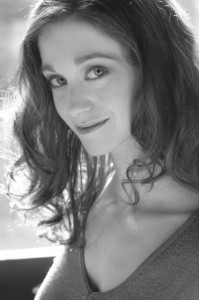 In 2005, I suffered a coma, a ruptured stomach, and underwent a total gastrectomy. When I awoke from my coma, I was told by my doctors that my stomach exploded. I couldn’t eat or drink, and it was not known when, or if, I’d ever be able to again.

With the expertise, audacity and innovative thinking of surgeons from seven hospitals, many 19-hour surgery marathons, and multiple shifts of nurses and doctors, I was miraculously reconstructed with the intestines that I had left.

Over time, I made slow, but steady steps towards recovering my “personhood.” I learned to sit upright again. When my tracheotomy was removed, I started to talk. Once my hands were no longer shaky from the medications, I began to write and doodle. With time, patience, resilience, and persistence, the “me” I remembered started to come back – the “me” that 26 surgeries could never take away.

By 2012, I felt like I had finally made the “great comeback”.  I had written, starred, and directed myself in “Gutless & Grateful,” a one-woman musical about my life. I was happy, healthy, and had an ostomy. But everything is better in retrospect.  At that time, I felt I was happy and healthy, BUT, I had an ostomy.

So I took a risk.  I underwent an elective surgery to reverse my ostomy. Unfortunately, this elective surgery turned into three emergency surgeries within eight days, an ileostomy, a nicked bladder, a fistula, and a wound that will never close.

An Ostomy Nurse Helps with the Setback

It was so overwhelming and traumatic to try to figure out how to put a bag over this gaping wound – this wound that now functioned as a second ostomy.  Then, Tina, a very generous nurse with a truly compassionate heart, visited me at my home. Previously, I had been unwilling to receive any outside input. But after weeks of stuffing towels around my abdomen, I knew I had to come to terms with the idea that this wound needed a big intervention.

This was a very big deal to me. It was my acknowledgement that this surgery, that I had chosen, was truly a setback. And I had no idea how I would make a comeback.

Tina admired my spirit, and did everything she could to help me. She dropped off new bags in my mailbox daily, and was determined to help me until we could finally find a solution.

She saw the spirit in me that was numbed by this tremendous setback, and she was determined to get me out of the house again. It was hard for me to imagine that just months earlier, I had been singing and dancing in a satin red dress, singing about my “gutless and grateful life.”

Tina saw that spark in me, and nominated me for a Great Comebacks Award. She had seen my show in 2012, and knew that I was capable of making a comeback once again, even when I couldn’t imagine doing so.

Things did get better. They got better because I was determined to make them better. I applied to college at 25. I booked two theaters to perform Gutless & Grateful again – updating the show with the 27th surgery for a little comic relief. I created an online dating profile for the first time, and met the love of my life, who is now my husband. I made a comeback, and I felt alive once again.

Then, one day, while I was at school in Amherst, Rolf Benirschke, the founder of the Great Comebacks Award, called me personally. I was so thrilled, I could hardly speak.  This was the first time I was really recognized for what I had been through medically, as a true survivor.

Not for my performance, my mixed media art or what I was doing in the community, I was being recognized for being a resilient, strong and proud ostomate. 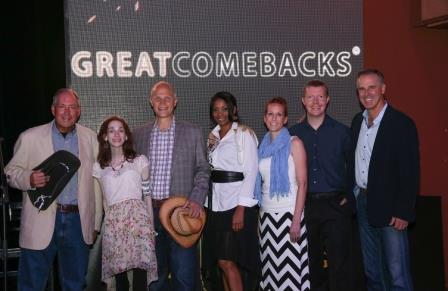 Great Comebacks changed my life forever. Being the Eastern Regional Recipient was so much more than being honored for my personal achievements. Through Great Comebacks, I was able to meet other ostomates that were doing wonderful and inspiring things. Call me sheltered or naive, but I didn’t even know there was anyone my age with an ostomy!

I met a beautiful fashion model, a dancer, a teacher, a nurse, inventors, warriors, enthusiastic, vivacious amazing souls. And – something very foreign to me – they were so proud of their ostomies, and grateful that their ostomies enabled them to lead such happy, healthy, and full lives.

Out of the Darkness and Into the Light

Great Comebacks was an amazing opportunity to be honored. So much of my own story had taken place in the dark, unknown to the outside world. Nobody knew how I’d spend hours in the bathroom changing my bags every morning. Nobody knew how, when I was unable to eat or drink for years, I’d lock myself in my room for every waking hour and journal. I avoided being  exposed to the outside world where normal people could eat and drink freely. It felt wonderful to be honest ,and share what coping with my medical situation was like for me. It also felt wonderful to gush about my father, a doctor who worked tirelessly to advocate for my health and save my life.

Great Comebacks was an important and truly amazing experience for me to have for my own personal sanity and emotional wellbeing. Part of me needed to know that, although I’m strong and can make a comeback just based my own love for life, I needed to know that others were doing it, too. Other “ostomates” who were SO much more than ostomates. Seeing these people embrace their bodies and situations changed my entire view on myself, and how I view self-acceptance and self-love.

The culmination of Great Comebacks was being honored in a ceremony at the National Convention of Wound, Ostomy, and Continence Nurses (WOCN) in Nashville, Tennessee. During the ceremony, videos of me, and the other regional Great Comebacks honorees, were filmed by Howie Klausner of Town Square Pictures, and shown to over 500 WOCN nurses.

These videos showcased how important WOC nurses are, and the impact of their work on real people like me. I cried as nurses came up to tell me things like, “It is so amazing for us to hear the impact we make on people. Thank you for sharing your story.”

Great Comebacks taught me to be proud, to be honest, and to love myself.

I see the Great Comebacks Awards as an experience that brings everything full circle. ConvaTec, the amazing company that makes it possible for ostomates to take care of their ostomies properly, honored me and other amazing ostomates. At the ceremony, we gave back our thanks to the wonderful nurses who make everything possible for us.

I owe thanks to my body, nurses, doctors, family, friends, and the strength in me to keep making comeback after comeback. And thank you, Great Comebacks for bringing us all together in this beautiful realization.

Amy Oestreicher is a 28-year old actress, musician, teacher, composer, dancer, writer, artist, yogi, foodie, and general lover of life. Surviving and thriving through a coma, 27 surgeries, and other trauma, has inspired Amy to share her story.  She has a passionate desire to create and help others.

After her initial dreams of performing musical theatre took a beautiful detour, Amy has written, directed and starred in a one-woman musical about her life – Gutless & Grateful. She has flourished as a mixed media and acrylic artist with her art featured in multiple galleries and dozens of solo art shows.

Discover more about Amy’s creative pursuits on her website, and leave comments on her blog which she updates regularly.

Links to Connect with Amy on Social Media