For Father’s Day, A Family History in Urology

My friend, Dr. Kathleen Hoffman, has a remarkable family history. Her father and grandfather were both urologists. For Father’s Day, I asked her to share with us how these two men impacted not only her life, but the lives of many, many others. 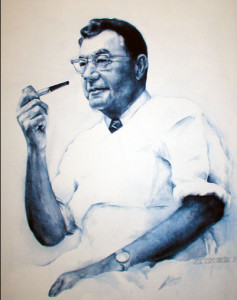 When President Nixon asked Grandfather what the most pressing problem in medicine was, he answered, “Cancer.” In his memoir Grandfather told Nixon,

“’I think every physician who is dedicated…never goes on the floor of a hospital where he has Cancer patients…without feeling helpless…feeling…there is so little that we can do…[thinking of]…millions of hours and…dollars spent on…research…how little progress we have made.”

President Nixon sent Grandfather to Moscow and Leningrad, as well as Europe, China, Brazil and Israel as a medical emissary to work together to fight disease and to learn about other countries’ healthcare delivery systems.

Grandfather campaigned for health care for all. In 1972 the Blackfeet Nation named him “Na-Doo-Yi-Pi-Ta” or Chief Holy Eagle.

Charlie, Urology in the Clinic

My father, though involved in local and state medical societies, primarily dedicated himself to clinical practice in Fayetteville, North Carolina. Dad often provided free service. After his death we found piles of unsent bills in a safe in his office. He never turned away patients who couldn’t pay and worked tirelessly to set up a free clinic for uninsured patients, until The Care Clinic was established in 1993. 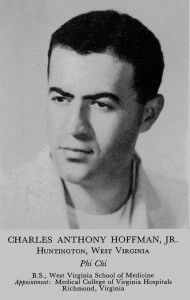 Dad took thousands of phone calls, answering questions, prescribing medicines, telling patients to meet him at hospital or office. If someone he knew needed help, he never hesitated to make house calls. He was innovative–reading about urology, bringing new treatments to his patients, staying up-to-date on new technologies. In fact, his knowledge of new treatments saved my uncle, who became the longest-lived survivor of advanced cancer (over 20 years) in a clinical trial of radioactive seed implants. Yet Dad was open to the old ways: his work with people in remote rural areas taught him that some of the old remedies, like ginseng and witch-hazel, were still effective and more readily accessible.

My experience of medicine is that of a child and grandchild of activists: constructed around knowing the intense gift of self that medical practice demands. Compassion, empathy, care, consideration, kindheartedness and energy are required.   Exhaustion is ever-present.

Although I considered becoming a physician, I did not pursue it for two reasons. First, the exhaustion my parents experienced took a toll on their health and our family life. Both my parents died at 67 from stress-related illness. Second, I heard from Dad and Grandfather how medicine was changing.

Grandfather believed the change had to do with too much government interference. In his inaugural address to the AMA he stated,

“The state of mind of most physicians today is…of profound disquiet growing out of the threat we feel…to our profession. Almost daily…there are attacks…on our motives, and our life-styles.”

Dad agreed, but also saw something different. He felt that people were going into medicine for the wrong reasons—not to help others, but to make money. 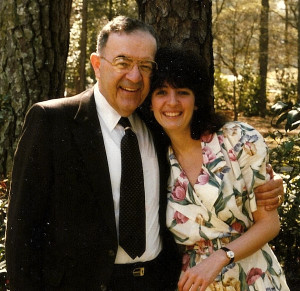 My experiences with medicine as an adult gave me grounds to agree that medicine had changed for the worse. Taking care of both my parents in hospitals showed me that hospital staff are overstretched and that loved ones should never be left alone. As a mother in North Carolina, I was struck by the lack of access I had to physicians. Physicians’ practices were huge, our time with the physician limited and, after-hours, physicians off limits. I would be left with nurses living in other states who looked at computer screens to determine what to say to me when I called about my child’s illness. I was often sent to a “Doc-In-A-Box” for care.

Since moving to Massachusetts, I have had better experiences with physicians. I have met physicians who realize that smaller is better. They answer their phones and speak to me the way my Dad did with his patients not so many years ago.

My take is this…healthcare is a business. Since it’s a large system, it’s hard for patients to identify whom to blame. So patients who have problems look at the person they can identify–the physician–as the one at fault. This is unfortunate because there are still many, many physicians who went into medicine for the same reasons my father and grandfather did. Their dedication to the arts of healing cannot withstand the endless onslaught of these two factors, and the result I see is burnout in physicians and other health care providers. The focus needs to change.  Without a change, the business facet will destroy the healing human face. 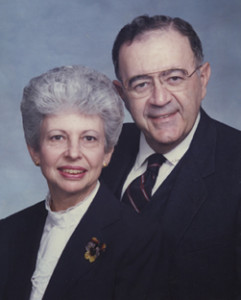 On Father’s Day I remember a man who loved his wife, his daughters and urology. Dad died suddenly, while on a vacation with my mother, in 1997. On the night before we buried him, I learned a lot about my father and his impact on the community he served. Hundreds of people came. There was a line of patients and friends outside and around the building, waiting to share their grief with us. Parents introduced their children to us (some now middle aged)—children that our dad had saved. People thanked us over and over again. Their gratitude for his care helped carry us through our grief.

Even though he was only 5’10, Dad, like Grandfather, dominated a room. But he often told me he was an introvert playing an extrovert. In fact, he used to prepare jokes for meetings with other urologists and would share (the clean ones) with us. For the daughters and granddaughters of Urologists, our perennial favorite went like this:

I think we need to use our kidneys to change medicine and advocate for the right of health for all—which includes people like my parents and grandfather–healthcare providers who give so very much to heal.

Kathleen Hoffman, PhD, is a communications professional and writer providing social media guidance to physicians and other professionals.  As a professional writer and communicator of nearly two decades, Kathleen is a leader in the movement of healthcare empowerment for both the patient and the provider.  Through her innovative and personal interactions with healthcare consumers and providers, she focuses on the human side of healthcare. Her social media presence includes the Medivizor blog, which focuses on chronic condition patient experiences; the Health Communication, Health Literacy and Social Sciences tweetchat on Twitter (#HCHLITSS); healthcare practice communities on LinkedIn; and healthcare-focused sites and pages on Stumble Upon, Tumblr, G+ (Google Plus), and Facebook.