Home > Physician Blog > The Doctor for 2018: Why Dr. Rob Davidson is Running for Congress

The Doctor for 2018: Why Dr. Rob Davidson is Running for Congress 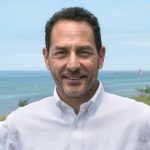 Recently, I had the opportunity to sit down with Dr. Rob Davidson, a local ER physician whom I have known for years. While discussing our community program Step Up, I learned Rob and I share common positions on healthcare, public education and diversity. I was also excited to hear Rob is running for Congress in Michigan’s Second District in 2018!

If, like me, you find the values and policies of the current Congress and administration are out of sync with your own, I encourage you to read our exchange below and consider supporting Dr. Davidson in his 2018 run for Congress.

A Conversation with Dr. Rob Davidson

As a husband, father and physician, you are a very busy man already. What motivated you to run for Congress?

The initial idea to run for Congress came out of the blue, literally. I was at a town hall in Baldwin debating healthcare with incumbent U.S. Rep. Bill Huizenga. I believe healthcare should be a right that every American enjoys. People began cheering and supporting the points I was making when a voice in the rafters yelled: “The doctor for 2018!”

A lot of conversations were started about running and what’s involved in a campaign. Once my wife and children threw their wholehearted support behind me, I filed the paperwork.

Ultimately, the decision to run was driven by a desire to give back to our community. – Dr. Rob Davidson

I grew up in a family where my parents worked tirelessly to claw our way into the middle class – starting a small business in our basement. Slowly, they grew the business, not just to provide for me and my sister, but also to create jobs and contribute back to our community. I love being a doctor and serving people for their health needs. Serving as a congressman will allow me to continue giving back in a different way.

What do you think are the most important issues facing our West Michigan communities and our country right now?

Like a lot of people, I believe our country is going in a dangerous direction. Right after the 2016 election, I had a sense of foreboding that our nation was headed into uncharted waters under a hugely unqualified, corrupt president and a Congress dominated by career politicians with an extremist agenda that would hurt ordinary people. Barely a year into this presidency, we can now see how dangerous this administration is to both our democracy and to our fellow Americans.

As a doctor and a school board member, I get to meet a lot of people who voice deep concerns about two issues that directly impact their families’ lives: healthcare and schools.

I believe, as do many others from all political backgrounds, that healthcare for all is the best way forward. – Dr. Rob Davidson

Our experiment letting powerful insurance companies and pharmaceutical giants take the wheel of health policy has led to skyrocketing costs, increasing premiums, and copays that keep going up – all at a time when ordinary families are seeing their wages stagnate and grocery bills get bigger. We must find a way to ensure everyone has quality, affordable healthcare, not just the powerful and the privileged.

Now, this administration and my congressman, Bill Huizenga, threaten to make things worse for our families by taking healthcare away from 23 million Americans, including tens of thousands of people right here along the Lakeshore and West Michigan.

A strong commitment to fairness must also drive our approach to strengthening our schools. Our education secretary has made no secret of her lifelong zeal to privatize our schools, which subordinates our children’s education and futures to the profit motives of large so-called “educational” corporations run by Betsy DeVos’ CEO friends. Instead of creating a system of winners and losers, we should focus on schools that educate all students, regardless of income, zip code and abilities.

What have you learned so far in speaking with citizens in our West Michigan district?

I’ve had the good fortune to meet so many people, Republicans, Democrats and Independents, who are willing to share their concerns about our community and our future. West Michigan citizens are very independently-minded, and independence is a quality that we value in our community.

Our families want a member of Congress who will put people before partisanship and politics. They want a Congressman who will be transparent and accountable.– Dr. Rob Davidson

Too many families are one healthcare bill away from bankruptcy. Student loans are devastatingly high. Corporate polluters get a blank check to take Michigan’s precious fresh water for pennies. America’s middle class is being gutted. Yet career politicians don’t share in the pain. Powerful CEOs get richer. This is what people see, and what they’re telling me.

What is your vision for the future of healthcare in America?

More and more people are coming together on a common vision for healthcare in America. It doesn’t seem to matter anymore who they are or where they live. I’ve heard from ordinary families. I’ve heard from some of the most successful entrepreneurs in West Michigan. I’ve heard from healthcare policy experts and economists. Republicans, Democrats and Independents are now starting to say the same thing, and it’s a vision I share: the best outcome for American families and small businesses is for our nation to implement healthcare for all.

The Affordable Care Act was an important step in the right direction, expanding health coverage to huge segments of Americans who previously never had insurance. America is ready to move to the next level, by providing health coverage to all families, through a system similar to Medicare for all, which will improve peace of mind, personal safety and security, and stability for businesses.

How can people learn more and support your campaign for the Second Congressional District of Michigan, if they are so inclined?

I firmly believe ours is a people-driven campaign that counts on the energy and enthusiasm of ordinary citizens to move an agenda that focuses on fairness. We want to make it as easy as possible for anyone to volunteer, donate, or help in any way.